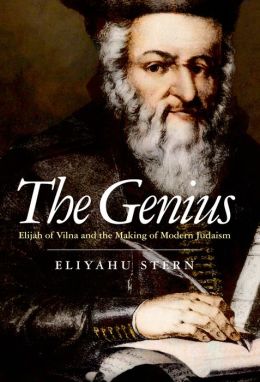 Have you read the new book by Eliyahu Stern, The Genius: Elijah of Vilna and the Making of Modern Judaism(New Haven: Yale University Press, 2013)? In a lengthy endnote on pp. 196-198 (note 19), Stern polemicizes against your reading of the Vilna Gaon’s interpretation of “sefer ve-sefer ve-sippur” (Sefer Yetsirah 1:1). Stern refers to your essay “From Sealed Book to Open Text: Time, Memory, and Narrativity in Kabbalistic Hermeneutics,” Interpreting Judaism in a Postmodern Age, ed. Steven Kepnes (New York: New York University Press, 1996), pp. 145-178, especially footnote 14.

Not wishing to rely on memory alone, I consulted the beginning of the Bi’ur ha-GRA le-Sifra di-Tseni’uta:

Sifra–A book (sefer) is the revelation of the thought, for the thought is closed within man and is revealed only by his speech or by his writing. And so En Sof was revealed, and created the world for [the purpose of] revelation and to make Himself known, as it says in the Zohar, and so the tikkunim that are explained in the continuation [of Sifra di-Tseni’uta] also [come about] through these two things, as it says in Sefer Yetsirah(The Book of Creation), “and [He] created His world with book, book and narrative (sefer ve-sefer ve-sippur). The matter of the two books and [single] narrative is due to the fact that in speech, at one stroke his thought is revealed, whereas in a book it takes two times: once when he writes and his thought is revealed in the world, but the book is yet closed; and a second time when the book is read and then revealed. But in speech, both are included at one time. (Elijah of Vilna, Bi’ur ha-GRA le-Sifra di-Tseni’uta, ed. Bezalel Naor [Jerusalem, 1997], 1a)
–
Elliot, your understanding of the passage is sound. On the other hand, Stern’s translation of the first term “sefer”(which he is forced to revocalize “sefar”) as “mathematics,” would appear to be without foundation. As for the revocalization from sefer to sefar, Stern has drawn on Yosef Avivi, whom he cites. (See Yosef Avivi, Kabbalat ha-GRA [Jerusalem: Kerem Eliyahu, 1993], pp. 32-35.) Yet even Avivi did not have the audacity to inject into the Gaon’s commentary the concept of “mathematics.” This mathematicization of Elijah’s worldview awaited Leibniz.
Best regards,
Bezalel
Share this article on Facebook!